Hi! I’m Naomi. I started this blog sometime ago for ‘writer’ stuff and writings about journeys. I’m now going to temporarily resurrect it for reflections during my final year of training to be a United Reformed Church minister.

My novel, If It Falls, was published in 2008 and is still available on www.amazon.co.uk

We are currently in Eastertide. We are post-resurrection. But we have always been post-resurrection. Unlike the disciples, we have never known a time when Jesus wasn’t dead and raised again. But it seems to me that most of our lives we’re stuck on Easter Saturday, that in-between time. The waiting time. This resonates with someone waiting to hear where they will be ‘called’ but so much of life is waiting. A time when nothing terrible happens, but nothing amazing either – fearing the disaster, the cancer diagnosis, the traffic accident, the redundancy, and hoping for the ‘resurrection’, the marriage, the birth, the new job, the special holiday. Life goes on pretty much the same post-resurrection. Carpe diem we’re told and every time something terrible happens, we cling ever closer to life and swear we’ll make the most of every day; truly live the moment. But that is unsustainable, with time we slip back into taking everything for granted. We forget the wonder of being able to drink clean water from the tap, we forget the joy of not having to eat rice and beans every day. We take for granted that we will get up and being able to walk around pain free.

I’m reading a book at the moment called The Book of Delights which is short essays about what the author, Ross Gay, calls ‘delights’ little things that bring him joy (though not all of them are cheerful). One of them is called ‘Joy is Such a Human Madness’ in which he ruminates on a Zadie Smith essay he’d read which differentiates between pleasure and joy. He says ‘de-light suggests both “of light” and “without light”…being of and without at once. Or: joy.’  In other words, life, ordinary, every day life, composed of ups and downs, weeping and dancing.

I have also been watching Miriam’s [Margoyles] Dead Good Adventure in which she looks at the subject of death. In the first episode she went to California to explore ways to cheat death and prolong life and in the second she faces the inevitable and talks with the terminally ill and surprisingly, along with the sadness finds joy in that. She asked one of the people in California who regularly freezes himself (yes, literally drops his body temperature by 40 degrees!) in an attempt to live until a cure for death is found; why he did it. He said, because the longer you live the more you value life. Miriam wisely answered, surely it is the other way around – it is the prospect of death that makes life worth living, that makes one want to seize the day and squeeze the maximum out of it. We may be post-resurrection people, but we can’t get to the Easter Sunday part until we’ve passed through the Good Friday part, and the long wait of Easter Saturday.

I also went to the Van Gogh exhibition. A painter who perhaps more than any other exemplifies ‘de-light’. Mad man or genius? Both at the same time. So I give you Starry Night… (more amazing in the flesh, but you can’t have everything!) 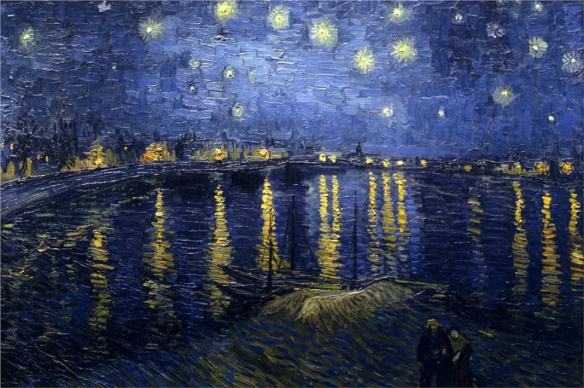